Welcome, everyone to my first ever website, A(ye)D(ee)Studio.com! I’m currently building everything right now, but will be launching this soon. That is, if any of you were fortunate to find this site all on your own.

Random segue, here’s the cover for my newest book, Fate: Into the Lungs of Hell. I will have plenty of time to discuss this as well as many other projects I’m working on.

One year ago, in the dead of night, a demonic entity took over the body of an innocent girl. It stripped her mind of any memory and would take control of her when she fell asleep. This entity has a violent penchant for blood, and would eviscerate and feed upon it’s unsuspecting victims. The first victim was killed walking home late one night. After waking up from her killing spree the night before, the girl realized she has no control over this, or over her life as she knows it. She decided that if she has to kill and feed, she would do so with the predators and the most horrid of us humans. This story documents her struggle as she tries to hold on desperately to her humanity, while at the same time satiating her demonic hunger.

She lives a nomad’s life; living from street to street, motel to motel. Miraculously, she keeps herself off the radar from the authorities. Her newfound demonic abilities allow her to easily slip from the scene of the crime, and offer them no suspect. But each gruesome death she causes brings her closer and closer to losing her humanity.

One night, the Girl lures a man online attempting to meet up with an underage girl at a seedy motel. They meet in a nearby diner, and she seduces him and has him lead her to the hotel. From there, she eviscerates him and eats him alive. While coming down after the attack, the police show up to the motel, and proceeds to kill them and get away.

After outrunning the cops and racking up a higher than necessary body count, the Girl seeks refuge and looks to recollect herself in the library, which has been a place of comfort and safety for her when she first became this terrible creature. After accidentally passing out from exhaustion for practically a split second, the demon inside of her frees itself from the Girl to terrorize the library patrons, and to teach her a lesson. She seizes the opportunity to end it all and tries to jump to her death. But she learns that as long as the creature inhabits her, she cannot die.

Waking up in a mental institution, the Girl starts to finally rehabilitate her mind. After a few months inside, a figure appearing as the first girl she killed enters her room, slowly revealing all of the memories the Girl worked to suppress. Driven mad and ultimately vulnerable, it is revealed that the “little girl” is the demon creature itself. It came back to reassume the Girl’s body by dismembering her and healing her by melding with her again. The demon creature takes control and swaps the Girl’s consciousness into the little girl’s body. It’s revealed that this is all a figment of the Girl’s imagination; proving she cannot escape the demon creature.

She wakes up in the rain, hungrier than ever, and out of control.

The Girl, possessed completely by the creature inside of her, goes on a months-long killing spree across the country. She carefully orchestrates a mass murder during a nationally televised parade, wiping out the entire downtown population in attendance. Almost right after, the creature decides to relinquish control of the Girl’s body back to her. It tells her the only way to die is in the presence of God, otherwise she suffers the pain of immortality. As silence drops over the city, and a surprising lack of law enforcement is nowhere to be seen, The Girl decides to head for the nearest church, where she symbolically attempts to set herself on fire and end her life. But a mysterious being intervenes just in time, and sets her alight herself and drags the Girl straight to Hell…

Lore of The Changeling explores different areas in time of the world of The Changeling! Some accounts are based in truth, while others are tales that are told from the mouths of those who have heard their own accounts of the carnage she has caused.

Lore of The Changeling collects these stories as 12pg stories, offered here to read for FREE, or available for purchase in the AyeDee Studio Shop in their physical form! 3 covers will be offered for each issue in limited edition formats.

Read on, and explore! Stories are updated throughout the week.

LORE OF THE CHANGELING ISSUE 1

BUY LORE OF THE CHANGELING ISSUE 1! 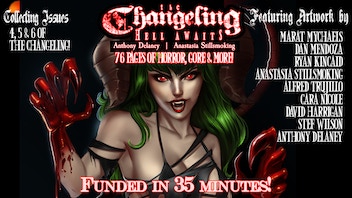 The Changeling Volume 2 - Hell Awaits is a 76 page perfectbound collection of Issues 4, 5, and 6 of The Changeling!

The Home of The Changeling!